*Oh I watched that film last night, Clicky… /puts fag to lips… First time. I can see why it’s considered a cult classic…*

‘The English phrase rule of thumb refers to a principle with broad application that is not intended to be strictly accurate or reliable for every situation. It refers to an easily learned and easily applied procedure or standard, based on practical experience rather than theory. This usage of the phrase can be traced back to the seventeenth century.’

*LOL, Clicky… /flicks lighter… Love me a bit of Lol in a LoL post… /lights up…

Good evening, Dear Reader. I don’t know if you’ve heard, but there was a major meteor occurrence toward the end of July…

‘Data from NASA’s Jet Propulsion Laboratory shows reported fireball events for which geographic locations are provided. Each event’s calculated total impact energy is indicated by its relative size and by color. The record shows a meteor traveling at 24.4 kilometers per second (54,000 mph) at 76.9 degrees north latitude, 69.0 degrees west longitude, on July 25 at 11:55 p.m, slammed into the atmosphere directly over Thule, Greenland.’

… And in this, our MAD whirled, the potential ramifications for such a happening, are scary as fuck…

‘According to the Military Times, the meteor “struck…miles from a key U.S. early warning air base,” which is home to the 12th Space Warning Squadron based at Thule, that operates and maintains the Air Base in support of missile warning, space surveillance, and satellite command-and-control operations missions. Thule is located 1,207 km (750 miles) north of the Arctic Circle and 1,524 km (947 miles) from the North Pole on the northwest side of the island of Greenland.’

… But in the context of the John Lamb Lash Sophia’s Correction narrative, it was Right on the gnos…

*Yeah, not only am I currently reading Lashy’s book during smoke breaks, Clicky… /drags… but on the 25th July, during the drought of ’76, a very famous image was taken… /flicks ash…*

I read about the mysterious meteor incident at around five a.m. this morning, before going to sleep. I mentioned it to my friend Cade, the Okie Devil of Text US, via DM in the Yellow universe… 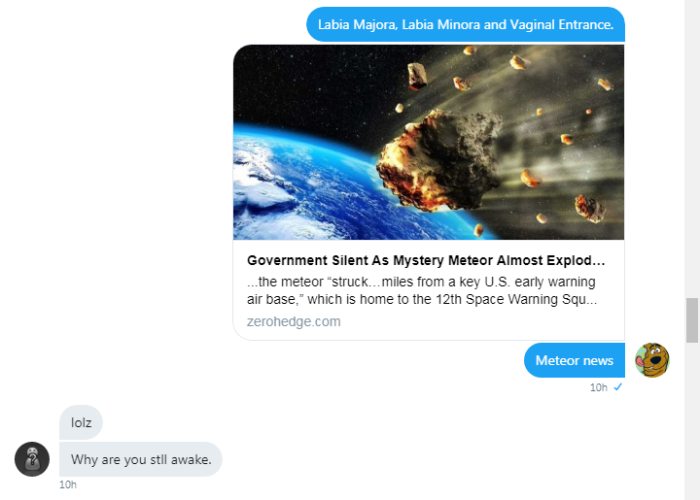 */drags… ‘Cos it’s the weekend innit, Clicky? …/streams smoke… “Mum’s time” as the boyz call it, when I can live in whatever fuckin’ time zone I bloody well like…*

‘region or island at northernmost part of the world, Old English, from Latin, from Greek Thyle “land six days’ sail north of Britain” (Strabo, quoting a lost portion of a work by Polybius, itself based on a lost account of a voyage to the north by 4c. B.C.E. geographer Pytheas). The identity of the place and the source of the name have sparked much speculation; Polybius doubted the whole thing, and since Roman times the name has been used in a transferred sense of “extreme limits of travel” (Ultima Thule).

‘The barbarians showed us where the sun set. For it happened in those places that the night was extremely short, lasting only two or three hours; and the sun sunk under the horizon, after a short interval reappeared at his rising. [Pytheas]’

Cade was quite correct; there was a Thule Society…

‘However, Nicholas Goodrick-Clarke contends that Hans Frank and Rudolf Hess had been Thule members, but other leading Nazis had only been invited to speak at Thule meetings or they were entirely unconnected with it. According to Johannes Hering, “There is no evidence that Hitler ever attended the Thule Society.”‘ 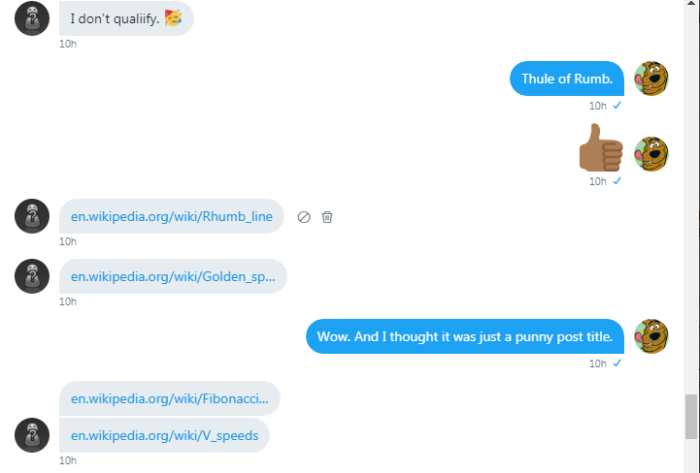 */drags.. Ease a clever fuck, Clicky… /holds smoke… ‘Rhum’ is a much better pun… /blows smoke rings… Must be ‘cos ease a pilot an’ can navigate… /flicks ash… Wouldn’t have occurred to me… /drags… *

Alas I couldn’t keep my eyes open any longer, Dear Reader, but Cade carried on whilst I slept…

Doo have a fantabulous week, Dear Reader, and, as ever… Have a Song ❤

9 thoughts on “Thule of Rhumb”