Sunday evening and all was quiet in the Library: Thoughtful Man was out working the mean streets of Southend; Things 1 & 2 were busy online making war and making friends, and our living, breathing hot water bottle was diligently practicing for any future, upcoming Sleep event at the Olympics. Poppy lay curled, molded around my backside, under my thick woolen cardie, snoozing and warming the small of my back. I’ve often mused how, dooshounds are more feline than canine. Well, ours is anyway.

Chores completed for the day (at least until the return of a weary Thoughtful Man), I was luxuriating in space and time, skipping through universes that I access via my book, listening to pictures and feeling out the sharp edge of words in conversations.

I wasn’t alone: Clicky was with me, of course, accompanied by the dynamic duo, Cath Fine and her significant other Nick O’Teen. All remained steadfastly to hand as I flitted and floated, fleetly fleed and flied, feeling roam free.

The telephone rang, causing Poppy to poke a curious nose out from under the cardigan she was using as a tent.

I wasn’t disappointed: Laindon is a good fare. “Okay sweetie. We’ll have dinner when you get back.”

“Yeah, I won’t be long. Listen,” he paused, ” I’ve had an idea for a smoker you can write your next post about.”

I was momentarily nonplussed; Thoughtful Man doesn’t usually read my wibblings. “What? Who?”

“Slush,” he said. Now I was really confused and repeated the name back to him.

“No, Slash. The guitarist from Guns N’ Roses,” he replied.

I thought for a moment and tried to picture the personage in my mind. “Curly black hair, wears sunglasses and top hat?”

“That’s the one,” Thoughtful Man confirmed. “He smokes on stage, sticks his cigarette in end of his guitar. There’s bound to be lots of photos of him smoking.”

I took a drag of Nick and a slurp of Cath, and briefly pondered his suggestion. Clicky, always quick off the mark, got busy. “But you don’t like Guns n Roses,” I answered. Well, he doesn’t.

“No, but I think you should do one on somebody that’s not dead. Look we’ll talk about it when I get home. Do you fancy pizza?”

Pizza! I crossed ‘washing up’ off my mental list of potential future chores, happily agreed with his suggestion, and rang off after an embarrassing number of ‘byes’ that’s really more associated with first flush of romance rather than 26 years into a stretch.

“Pizza?” came the mournful voice of Thing 1 from the darkened nook of the Library, “Can’t we have Chinese?”

Dear Reader, I’m not gonna do Slash. He gave up smoking in 2009 after his mum died. He fails the ‘Bravery’ criteria. But I do like the idea of profiling somebody alive… Thoughtful Man, a firm anti-monarchist, will probably hate me for this butt…

Okay, okay, I freely admit, he’s no Barry Sheene, but he is alive and still smoking, and as for the fifth criteria, well, he did cause an interesting stink…

*I dunno, Clicky, it’s a bit weak… /bites nail… And Thoughtful Man really doesn’t like royalty… /spits… It could all hinge on the Song… What do you reckon?*

An online friend, who’d spent the day in Birmingham, sent me through a photograph and a trivia question yesterday evening…

As I was sitting up in bed at the time – Thoughtful Man and I were catching up on a saved episode of ‘Pointless’ (I’d just got a Pointless Answer with Rutherford B. Hayes …/buffs nails) – and my iPad would only blow the image up so far, I decided to give it a good, hard stare and hazard a wild guess…

I was hopelessly wrong of course, but my friend is nothing if not incredibly kind…

We wrote about the Bonhams Stafford auction a few weeks back and pulled out our pick of the products then.

Top of our list – aside from the many, many motorcycles that we would have loved to have been able to drop some pound notes on – was the 1974 Bell race helmet that is said to have been worn by Barry Sheene during his infamous Daytona crash in the same year.

It was up for sale at the weekend with a reserve price of just £5000; and even at this amount it was way past our budget. But it eventually sold for £15,625 (including sales premium).

Not too bad for a lid that’s over 35 year’s old, is scuffed out of recognition and even has a hole drilled into the front chin-guard for a cheeky cigarette!

If Dear Reader is at all unfamiliar with Barry/\ Sheene, there now follows a short information film, detailing the bad breaks that befell him in pursuit of his racing dreams…

Just what I’ve come to expect of a smoker in these Times of official sounding statements like ‘SMOKING WILL KILL YOU’ and ‘YOUR LITTLE DOG, TOO‘ – Bravery and Sexiness… Don’t believe me on the amount he smoked? 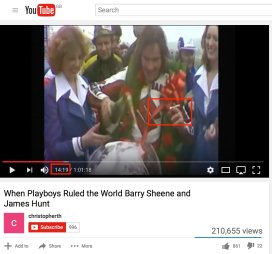 And he was famous for his pong…

Then my online pal went and sent through two more attributes I constantly find in the majority of smokers that I encounter: Generosity and Cleverness…

Bravery, Sexiness, Cleverness, Generosity and a certain X Factor (in Mr Sheene’s case, his smell), it occurred to me that these would be fine criteria to judge others by…

So, if Dear Reader has any suggestions for recipients of the title ‘Smokin’ Smoker’, please let me know in the comments and I would be happy to consider…

*/ponders… Is that Have a Song, Clicky, or are you making a suggestion?*

*By George, I think he’s got it… /smiles broadly…*