UPDATE: The statue of slave trader Robert Milligan has now been removed from West India Quay.

It’s a sad truth that much of our wealth was derived from the slave trade – but this does not have to be celebrated in our public spaces. #BlackLivesMatterpic.twitter.com/ca98capgnQ

How interesting. Tell us more about the horrors of the Arab-Muslim slave trade and how black slaves were treated. I’m all ears…. https://t.co/oVipmrSvze

The first black actor to ever win an Oscar was just erased pic.twitter.com/5eCLfkB23I

*Yeah, Clicky, that so reminds me of mum… /lights up…*

… And struggling to write a submission of my own. So, I thought I’d post an extract from Mother’s scribblings, to see if it can’t get my own creative juices flowing…

Extract from ‘A Family History for Ruth and Julia (Gawd ‘Elp Us!**)’, a.k.a. ‘The Ma Papers’ by Judith Eileen Newton (formerly Shewan, née Packer)

My cousin Margaret and I used to go to a dance hall at Catford called The Savoy. It was really classy compared with Victor Sylvester’s. It was later renamed Mr Smith’s and was closed down after a fatal shooting, and I read in a crime book that the shooting was to do with the Richardson gang.

The Savoy had a member’s bar downstairs, and typically for the time, only men could be members; women could only be guests. Our main aim was to meet a man who was a member so that you could enter the inner sanctum so to speak. It was a really weird sight on a Saturday night because the main dance floor was virtually empty except for girls until about 10 o’clock. They would be dancing together and waiting for the boys – who by now were well oiled having been downstairs drinking all evening – to appear, ready to pull.

To have a long term boyfriend that was a club member enabled you to bypass the upstairs dance floor and go straight downstairs with your bloke. Then you could amble upstairs with him later and look down our noses at the expectant girls amassed as if to say ‘Look what I have got girls. Eat your heart out’.

I’ve always been fascinated with people and psychology and I think that, even then, I looked at people and mused. I have been in both situations at The Savoy – both with a bloke and without – and the mating dance is fascinating. It rarely changes; just the people were different. When I started to go dancing again, after Daddy died and I moved to Southend, I was petrified because I had not done that sort of thing for years. I really shouldn’t have worried because it has not changed. Oh the words are different, and the remarks are cruder and courser, but basically it’s the same.

The boys arrive and circle the floor sizing up the talent. The girls try to look nonchalant but are also eyeing up the boys. They have a sixth sense about who is going to ask them to dance and will indicate to the girl that they are dancing with that two guys are approaching, and whether they look good or not. The other will then say ‘no, I don’t fancy them’ or ‘yes, they are all right’ and the boys will then try to split them up. That’s easy if the girls fancy the boys, but virtually impossible to split them if they don’t.

Remarks like ‘Piss off’ or worse were not used in those days and yet I have heard them nowadays. Back then we gently declined and the boys continued to circle looking for other likely candidates. The girls’ worry was wasting a dance on someone that they did not fancy and missing out on a better prospect. The boys’ worry was to be left without a girl at the end of the evening.

The worse part of being a girl was that if your mate was prettier than you. She would be asked to dance while standing on the sideline, and this would leave you on your own if you were not asked to dance. You felt embarrassed, and even though you both agreed at the beginning of the evening that one would not dance and leave the other alone, when the crunch came ‘all’s fair in love and war‘.

Margaret being 4 years older than me was particularly unscrupulous in this respect. Many’s the time when I have refused to dance with someone and leave her on her own when, blow me, she’d be off with the first bloke that asked her, leave me standing.

It was on one of these memorable occasions when Daddy ambled up to me and it all started. Margaret and I were dancing when the boys came upstairs. I saw these two blokes eyeing us up and said to Margaret, “There are two boys coming over. Say no.”

Terry asked Margaret to dance and she said “Yes”. His lanky friend asked me and I said “No”. Margaret waltzed off with Terry, leaving us standing there awkwardly.

Still smiling, Daddy leaned down and whispered in my ear,“I have just walked the whole length of this dance floor to ask you to dance, don’t make me look like a fool now.” So I danced with him and your lives began.

Terry took Margaret home and she lived in Bellingham, which is a long way from Bermondsey, which is where I lived. As it turned out both Terry and Bob lived in Bermondsey, too.  Sods law is that I went to Catford to meet new folk and end up with a bloke that lived in the next street.

I will not go into any more details here I will leave the details until the chapter about myself. 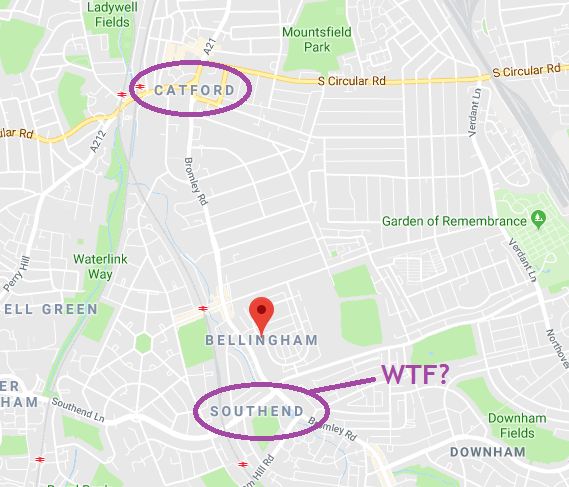 Enjoy your Sunday, Dear Reader, and… Have a Song ❤