Mother had a few ‘truths’ she would impart to me and my sister when we were growing up. Dad, too, although his favourites included:

“Ignorance is no defense before the law,”

“Always be nice to the PAs – they’re the gatekeepers.”

The two that Mother used most often were,

She mentioned that one to me several times one raining Sunday afternoon, as she made me pore over the telephone directory, looking for the phone number of a boy I’d met in the pub the night before. I was 16.

The other one was,

Leggy wrote a post about The War last night. This would be the War on Tobacco, declared by Anti-Smokers in their bid to…

… forge a tobacco-free world. Smokers are but collateral damage in the mighty offensive, waged upon a plant that inhabited this planet long before humans ever did.

If reality, and by that I mean real life lived and experienced, is ruled by laws based on lies… science fiction… does that not bring science fiction into play? Seems fair to me…

What is the greatest mystery in science?

There is a most profound and beautiful question associated with the observed coupling constant, e – the amplitude for a real electron to emit or absorb a real photon. It is a simple number that has been experimentally determined to be close to 0.08542455. (My physicist friends won’t recognize this number, because they like to remember it as the inverse of its square: about 137.03597 with about an uncertainty of about 2 in the last decimal place. It has been a mystery ever since it was discovered more than fifty years ago, and all good theoretical physicists put this number up on their wall and worry about it.) Immediately you would like to know where this number for a coupling comes from: is it related to pi or perhaps to the base of natural logarithms? Nobody knows. It’s one of the greatest damn mysteries of physics: a magic number that comes to us with no understanding by man. You might say the “hand of God” wrote that number, and “we don’t know how He pushed his pencil.” We know what kind of a dance to do experimentally to measure this number very accurately, but we don’t know what kind of dance to do on the computer to make this number come out, without putting it in secretly!

Dear Reader, if you’re a frequent visitor to the LoL, I have made no secret of my fascination of 137 and synchronicity. Nor my love for the greatest science fiction character of all time… Who?

*Damn! Wouldn’t it be hilarious if the mystery were solved by someone enjoying tobacco, Clicky?*

Fun Fact! Peter Capaldi, the current and 13th (if you include the Hurt War Doctor) played a doctor from the W.H.O. in ‘World War Z‘ before entering the Tardis… 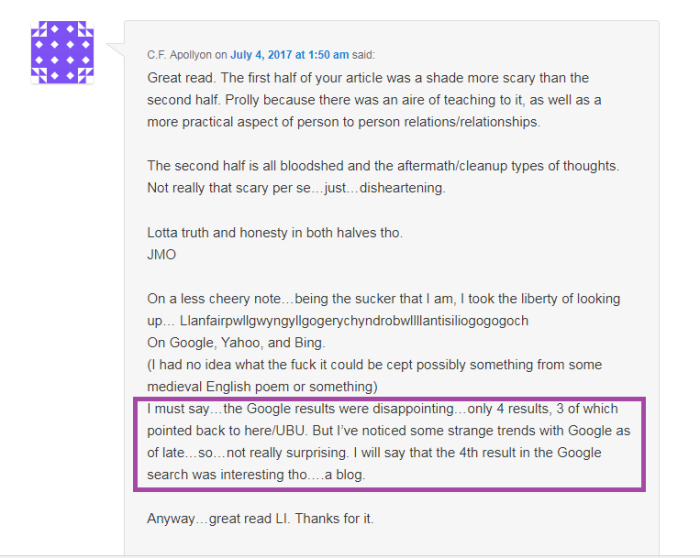 Sew… I did a search and he was absolutely correct…

… All’s fae in love and war… I guess it depends on your angle, see 😉

Dear Reader… have a drink…