*There you are! /taps foot… I got back really quickly. Where have you been, Clicky?

*Red Franks? I left you at Blue Franks… Clicky, dinner is about to arrive and Thoughtful Man and I have ‘Suicide Squad’ to watch… I wanted to write this post before he got home from work… /wrings hands… * 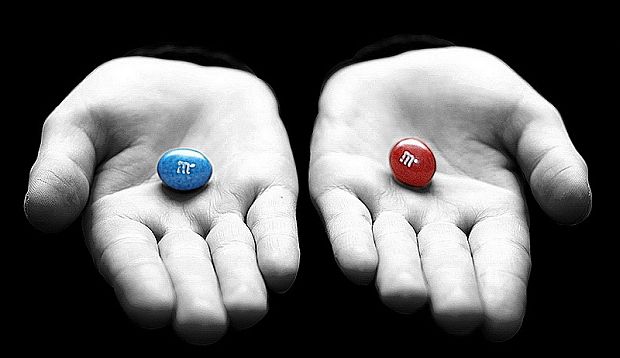 *Chocolate? You think you can get round me with… chocolate? /takes both… Delicious… Damn, did you hear that?* 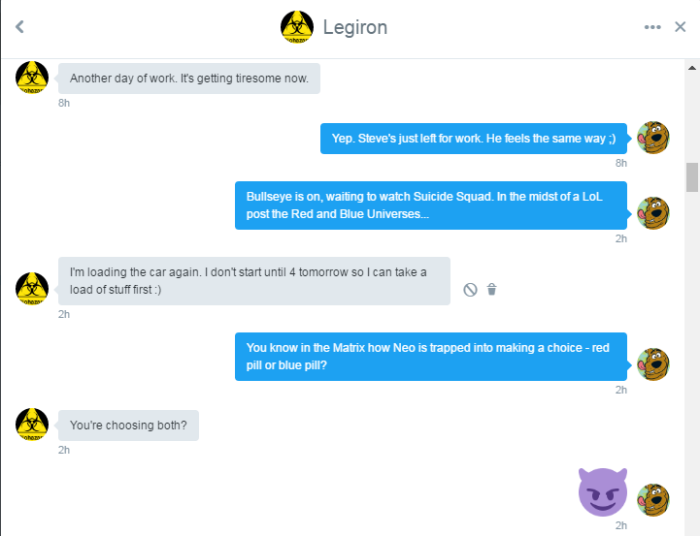 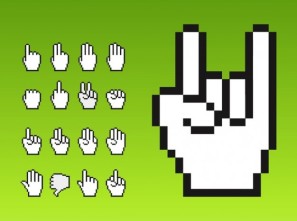 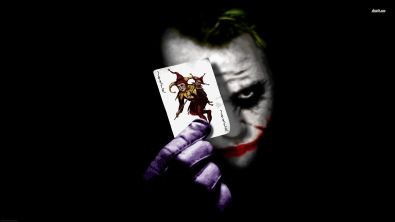 *Oh there you are…/kisses snout… Make us a cuppa, Clicky? …/groans and lights up… What the fuck happened last night?*

*Monologued with Legs… Yeah, what else?*

*/slurps and drags… Then what?*

*Oh yeah, fuck… the Debate… That was fucking excellent…* 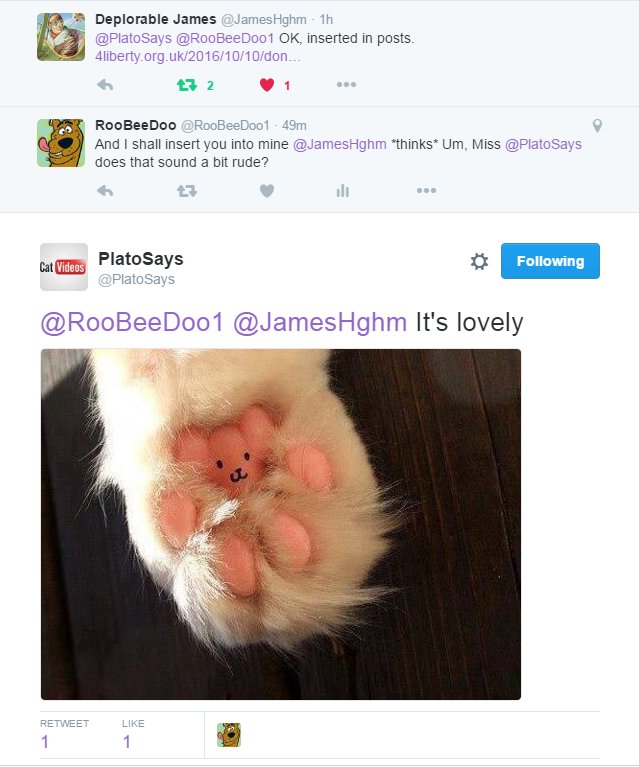 *Hey! Have you been wearing my Rubedo mask again, Clicky? I was asleep 49 minutes ago… I know, I still have the taste in my mouth… /lights another… Better…*

*Alright, let me get myself together, Clicky… /yawns… I think I’ll have another coffee… /stop hand sign… It’s okay, darling, I’ll do it…* 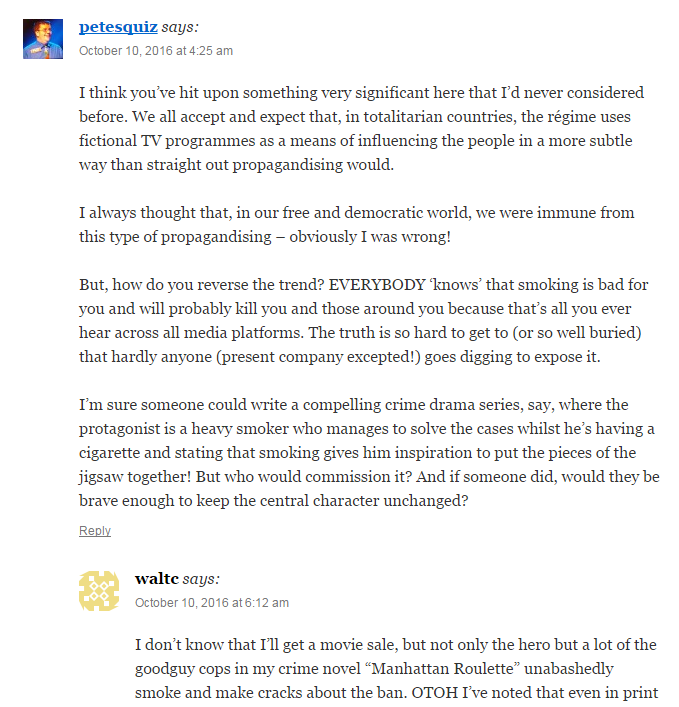 *I know! How did he know I was going to use from TBBT in this post?!*

Dear Reader, we have a number of owls at the LoL…

None of our owls have names. This fella came from the Packer side of the family. It used to be a table lamp; I’m not sure if Grandad bought it or was given it by German POWs in WW2 – he was Captain of a camp in Egypt and was given lots of carvings by prisoners who appreciated his fair and even-handed treatment. But it hasn’t cast light in a long time… 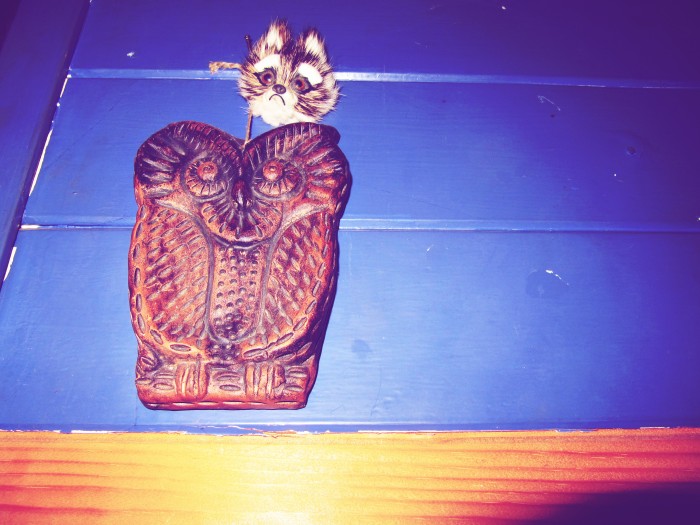 I don’t know where these guys came from, but they look down on me in the Library every day. 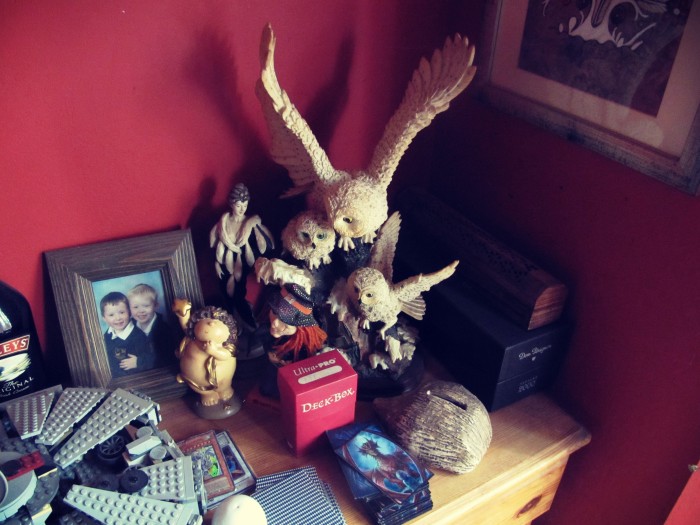 I remember exactly when these fellas arrived. It was the day the boys broke up from school for Christmas. Thoughtful Man and I were waiting in the playground to collect them. Thoughtful Man had gone off with Kit Kat (who was always first out) for a chat with one of the other dads. I was standing aside, stamping my feet and blow out pretend smoke with my frozen, crystalised breath.

Suddenly I spotted Loops’, smiling from ear to ear, rushing toward me. He looked so excited. Then I saw his puffing, red face teacher, plodding along on behind. She was laden with… OMG, what the fuck was she carrying and why is she mouthing ‘I’m so sorry’ in my direction?!

“Mummy! I got you a Christmas present!” Loopy exclaimed, wrapping his little arms around my waist. “Owls!”

*Brilliant! Finished it at last, Clicky… /yawn… I think I’ll slip off to bed for a recharge… Give Dear Reader a Song, please…*

8 thoughts on “‘Owls With Laughter…”