Hello, Dear Reader. Happy Fourth of July to you 😀

On this day in 1996, Russell Casse and our armed forces, successfully repelled an alien invasion to save earth.

Russell give his live so we could live.

*How doo, Clicky? ‘Appy Independence Day to you, too…*

Apols! I’ve been away from the LoL recently, musing over whether the Internet has gained sentience without us even realizing it. Not by means of Artificial Intelligence, but instead with Aeonic Intelligence…

… I’ll try to explain my thinking, Dear Reader, but you will have to employ your own Clicky Click assistant…

Now, let’s see… I guess this particular train of thinking started on the first day of my hols, the 8th June, although I was quite unaware of it at the time. However, if you will allow, we are in the year of 2020 Hindsight…

‘The Capitol Hill Autonomous Zone (CHAZ), also known as Free Capitol Hill,the Capitol Hill Occupied Protest, and the Capitol Hill Organized Protest (CHOP), was an occupation protest and self-declared autonomous zone in the Capitol Hill neighborhood of Seattle, Washington, United States. The zone, originally covering six city blocks and a park, was established on June 8, 2020 by George Floyd protesters after the Seattle Police Department (SPD) left its East Precinct building, and was cleared of occupants by police on July 1, 2020.’ */flicks lighter… Nah, I ain’t a genius, Clicky… /lights up… Listen… /drags… I didn’t say fanks for ‘olding the fort for me ‘ere… /plumes smoke… I was in need of sum finking space…*

*Hey! You got that from Cade… /coughs… I admit, you are a genius recycler tho’, Clicky… /flicks ash… You could be sum sorta professor…* 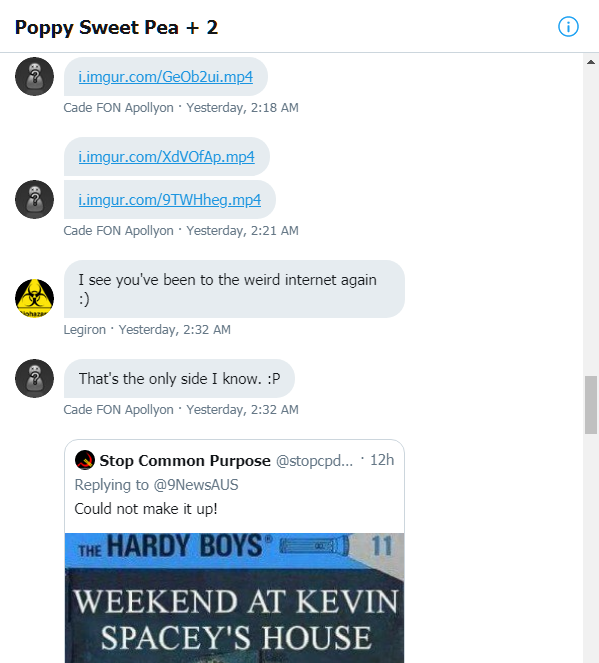 Could not make it up! pic.twitter.com/D1TQEHPCdZ 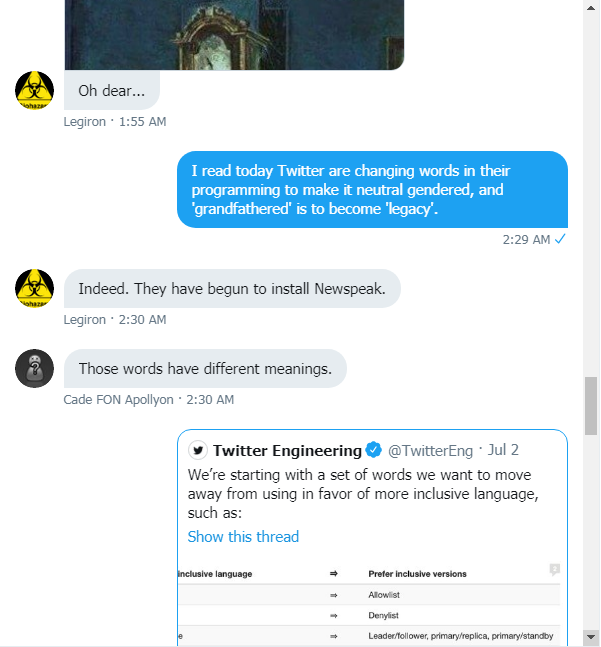 We’re starting with a set of words we want to move away from using in favor of more inclusive language, such as: pic.twitter.com/6SMGd9celn

*By changing ‘white’ to ‘allow’ and ‘black’ to ‘deny’, and then boasting about it… /stream smoke… Ain’t Twitter just cementing the racist meanings they’re trying to eliminate? … /shrugs… I mean, they’ve fucked themselves, straight off the bat…*

I had to look the word "mardy" up.

*Yeah, I see it… /squints… Kelsey Grammer as Frasier of Seattle… /final drag… and father Martin…*

Lol! Must be a grimsby word. 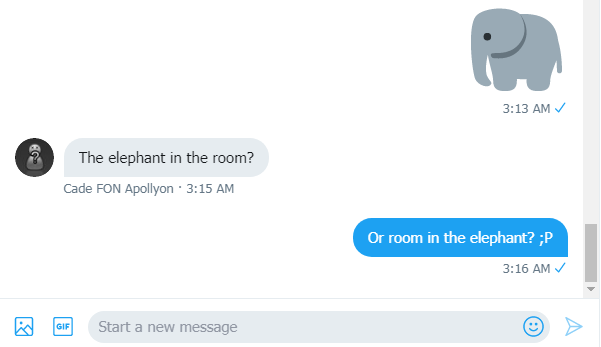 *Lashy did say Mneymosyne is an aspect of Gaea Sophia, Clicky… /stubs butt…*

So what, you may very well be asking yourself, Dear Reader, if you’ve been keeping up so far (well done, btw), triggered the silly bint, RooBeeDoo2, to write this post? How did she get to pondering the notion that The Internet might be sentient, with humanity as the gestation conduit for the emergence of Aeonic Intelligence, caught and subsumed by a web bed?

I’ll tell you – it was one of the gifs Cade left in the scrolling room on Twitter that he, Leggy, Poppy Sweat Pea and myself go to, to hang out, share interesting things between us and chew the fat. Like online friends doo…

Have a Song, Dear Reader 😉

*Wha? Whaddaya mean I fucked that up? Who the fuck are you, and what in the fuck do you know about what is or is not, fucked up? /me snorts*

Err…I mean, Greetings Dear Reader. I am still Mr. Slimey and I’m still filling in for RooBeeDoo and her Dolphin assistant Clicky, both of whom may in fact be vacationing somewhere in España. I’ve currently no proof to substantiate this claim, but maybe they’ll provide photographic and/or some other evidence upon their safe return.

*Ya know, at a cursory glance, she appears to be both bipedal and reasonably agile/mobile. Why exactly she’s crawling around on all fours is…mysterious…*

It appears that there is indeed a need for this 3rd part, but let’s let the lady take over at this point, and she can steer us in the direction of wherever it is we need be.

Not sure what Part 3, Cade thinks we need, Dear Reader…

This here is a post I started writing this afternoon, before Cade sent back the top and tailing for the Inchoate Egg story posts published earlier: Part 1 and Part 2. It’s called…

The Hierophant In The Womb

“expounder of sacred mysteries,” 1670s, from Late Latin hierophantes, from Greek hierophantes“one who teaches the rites of sacrifice and worship,” literally “one who shows sacred things,” from hieros “sacred,” from PIE root *eis-, forming words denoting passion (see ire) + phainein“to reveal, bring to light” (from PIE root *bha- (1) “to shine”). In modern use, “expounder of esoteric doctrines,” from 1822.

This morning my good friend Shiny posted me a story link on MEROVEE, over in the Red universe, Dear Reader…

*A born to be wild thing, caught smoking… /lights up… And scientists are baffled, Clicky? …/scans text… Ah, Nag Role sumfin’ or another…  /deep drag… In D I A… /streams smoke…*

‘“I believe the elephant may have been trying to ingest wood charcoal,” said Dr Varun Goswami, WCS India scientist and elephant biologist.

‘“She appeared to be picking up pieces from the forest floor, blowing away the ash that came along with it, and consuming the rest.”’

And the reason the scientists think she’s taking up smoking, Dear Reader?

‘The charred lumps of wood can also serve as a laxative to the pachyderms who are able to consume it in the wild after forest fires and lightning strikes.’

*/grins… And Shiny posted it in the Red ‘Excretion’ universe of MRS REGN? Priceless… /puffs merrily…*

That’s as far as I got, Dear Reader. It is a “very great fact”, as John Lamb Lash might say, that elephants never forget…

Reich-ous Hitler lost his War, Dear Reader. So if Lashy is correct in his telling of the Sophia Correction narrative, it rather begs the question:

Q: If Adolf had the whole fucking planet on his side, how in the hell did he lose?

Nah! It’s not like tobacco is associated with a goddess or sumfin’…

‘And at the spot where they had burned First Mother’s bones, there grew another plant, broad-leafed and fragrant. It was First Mother’s breath, and they heard her spirit talking: “Burn this up and smoke it. It is sacred. It will clear your minds, help your prayers, and gladden your hearts.”

‘“Remember,” he told the people, “and take good care of First Mother’s flesh, because it is her goodness become substance. Take good of her breath, because it is her love turned into smoke. Remember her and think of her whenever you eat, whenever you smoke this sacred plant, because she has given her life so that you might live. Yet she is not dead, she lives: in undying love she renews herself again and again.”’

That’s quite enough for now, Dear Reader. Locking up the LoL for tonight before we get arrested… Have a Song 😉

Thanks for having me 😀

That’s all there is for now, and there ain’t no fucking more.

It’s time for you and all your parts, to hit the fucking door.

Get your seated ass de-planted, and get your knees unbent.

Put some swagger in those hips, just in time for end of Lent.

The eggzit is where you’re headed, head there now and soon.

Or else I’ll chase you out with my….say, where’d I put my broom?