“What do you want me to do?” Thoughtful Man sighed and heaved himself off our bed, dislodging our contented pup who had been getting her belly rubbed thoroughly. Just the way she likes it.

I stood against the bedroom wall and brushed a stray lock of hair back behind my ear. “Take a picture of my tiara, please.”

“Why?” Thoughtful Man threw me a squint. “Is it for a post?”

“What do you think?”

He snorted and fiddled with the camera. “The light is terrible. Why in here?”

“Well, for one thing, you’re in here,” I said adjusting the tiara. “And secondly an AI somewhere has invented some colours and named them. Apparently our bedroom walls are painted in ‘Turdly’.”

“I wasn’t asking you to,” I replied with a smile. “Just the photo please.”

Cade has sent through a new ‘whatever’ to use his parlance. It’s not as long as the previous monster of a missive, but no less engrossing. I hope you enjoy it, Dear Reader…

Nah…just fuckin’ wit ya. I’m inside sitting at a desk typing this shit right here and listening to music at max volume. There could be a fucking hurricane outside and I wouldn’t know it.

I’ve done a little writing elsewhere… (“a little”…lolz) …which means I’ve been thinking a bit. Had a bit of a discussion with Roob the other night about motion(s) and when they get weird. Not gonna try and “sum up” any thoughts in this here whatever, but I might wind up doing just that. Or at least, sounding like I am doing that. But I get the feeling that there are two types of people, with respect to finding…

Type 1: I found what I was looking for…game over.

Type 2: I found what I was looking for…game on.

Keep both of those in perspective as it relates to what you have found…and you can prolly better decide which is applicable, when, and where and to whom. 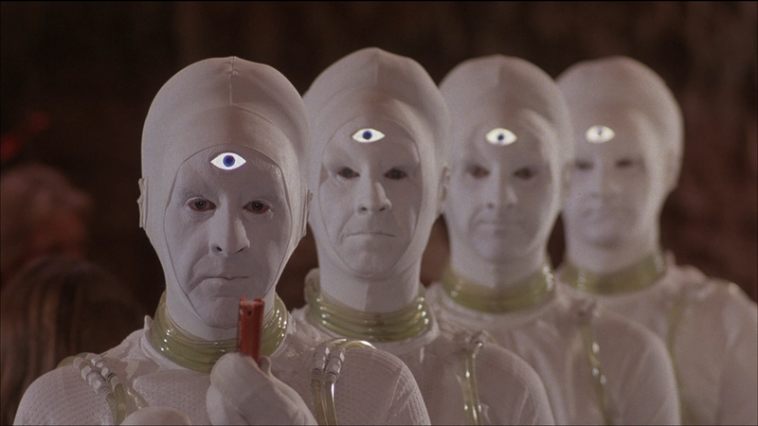 It’s weird. I was just thinking about the movie “Starcrash” the other day. Which also made me think of the movies “Battle Beyond the Stars” and “Laserblast”…all of these movies I saw at a drive-in theater when I was younger. There was a group of entities in the movie “Battle Beyond the Stars” that were a kind of “Borg” species, cept not quite so snotty and adventurous as “The Borg.”

Starcrash
Battle Beyond the Stars
Laserblast

What I was thinking about, is all of this business being talked recently regarding telepathy, which appears to be more about clairvoyance than telepathy. And I’m thinking about it more now that some chucklehead has made another public spectacle with “hearing voices” being touted as “the cause.”

In the article above on Telepathy, there is a picture to the right with the following caption…

“The Ganzfeld experiments that aimed to demonstrate telepathy have been criticized for lack of replication and poor controls.”

EX: Someone can lift 500 lbs as a personal-best.

Can they always lift 500 lbs…every single time…on command or as commanded?

Do you then start judging style and technique?

Is that as high as they can go in weight?

What about over time?

How long did it take them to achieve this weight as being liftable by them?

Is there a significance to this number?

Is there a significance to this number for all people?

Could they always lift 500 lbs, they just didn’t know it yet?

Q: What is your role in their performance and its success or failure?

Maybe there’s a mishmash possible there between Clairvoyance and Telepathy…a kind of Tele-Clairvoyance.

Data and information without context is kinda…worthless. And to be honest, I don’t really see the difference between building something in your mind, that you eventually build with your body in a more tangible manner. You are going to be continuing that process of building in your mind as you build with your body, which says to me that there is sometimes no division between these two. All that was or is missing…is purpose. So tell me…

Q: What is the purpose in being first?

Q: What if you’re wrong?

Q: Does this concern others?

Q: Now what if you’re wrong?

Throw this image of “the higher self” into the mix, and suddenly things get REALLY fucking wack. Is it any wonder that people are confused? Or at least, that there is confusion and some people may have a propensity to be confused? Factor in, that much of what transpires under the guise and guises of clarity and control?

I mean, can you control a tube of toothpaste? Oh yeah? For how long? Control is as temporary as anything else. Add an observer into that mix, and suddenly, we are being judged on anything and everything…up to…and including…our form and style as to how we handle a tube of toothpaste.

Q: Weren’t we doing that already?

Yeah…since when do you not judge every single thing that you do? Without bias, we know neither success nor failure.

OH! And regarding your teeth-brushing skills? You missed a spot.

Yep…lotta new stuff in the world. Add “the dynamics of the application of these new things” with new users/new experiencers? Yep new new just got new new newer. Especially with respect to children, who everything is new to. Trying to explain old shit as old to someone who it is new to can be an exercise in futility when not approached with a degree of humility. I mean…how fucking cool is it to be the one with the opportunity to open new eyes to old things? What a treasure eh? That’s just my thinking tho.

I still get a kick out of seeing my children learning new things and stumbling around in life as I do the same. I’ve mentioned this before, but assuming that there is a God, I think this is why we are never referred to as anything other than children in The Bible. I dunno about other religious texts, but it has had the effect of keeping me a bit humble with respect to new things, whether they be old or new, or just new to me. I think people do the same, more than they give themselves credit for anyway. Or maybe not /me shrugs

It bad enough telling someone what they can or cannot do in the present.

Takes quite a set of balls to have the audacity to tell someone what they can or cannot do in the future.

Welp…you wanted to be gods.

Yer trying to figure yer own shit out eh? How you gonna do that via others? How are ya gonna do that via others when other channels are open to you, which are “less-than-standard” types of channels? You cannot undo what has been done. And even if you could, the act of undoing what has been done would undo even more than simply “the one thing you were trying to undo.” Eventually, there would be a collapsing motion that would accelerate so rapidly, that all of existence would begin to collapse…except for you and your tinkering…which would continue at a steady state pace that is relative to the way things were.

Meaning: Time would fold and continue folding, as it collapsed under the weight of the entirety of all matter in The Universe…leaving only a single variance within this new time.

Kinda has the effect of…pointing…eh?

This is how I see “the unseen” working within “the seen” anyway.

I’m not talking specifically here…I mean things that needed to transpire in order to keep similar events from ever happening again in the manner in which time and matter collapsed the first time.

So am I suggesting that “the collapse of time” is now an impossibility?

I am suggesting that “the total collapse of time” is now an impossibility, and/or, discretionary.

Time can and does still “collapse.” I see this as a necessary function of time for it’s continuance.

This allows for modification and tinkering.

Think of a resonance that is allowed to continue over time. What will be the effect of that resonance over time?

Any resonance outside of a resonance, is detectable.

Sometimes these are expected, sometimes…not.

Maybe we missed something?

Am I really suggesting that time nor matter have any speed limits?

Yep. Keep that contextual, and suddenly you’ll see all sorts of speed limits.

Q: How long are you prepared to monitor said speed and times of whatever it is that we are observing?

I understand many of science’s theories about The Universe and what it is up to. The thought that it will someday just…vanish…or fade into non-existence due to all fuel and fuels being expended, is an intriguing one. Primarily because of how it opposes the current theory that much of the stars and starlight that we are currently seeing has already long since ceased to exist due to it’s distance from us…and yet…there they are. This is prolly why we get confused so much…we’re always trying to narrow and limit, usually to either one thing, or one small group of things. And sometimes that works. Sometimes not.

I started writing this one last night (hence, the nutty “night poetry” business at the top) but it’s Friday now…and I have to go start getting ready to go out tonight. I have a hot date. No wait…I don’t. But a case of beer and a movie would be nice. Won’t have any of those either, so I’ll prolly wind up playing Plants vs Zombies till 2 AM. Better than nothing I guess.

Lot’s of talk I’ve noticed lately, has been as if some precipice will be reached at some point, and then everything will be OK. Welp, what if we’re already there. When are we NOT there? And I guess that’s where my personal answer lays…in helping others. I mean, I’m happy. Or at least, as happy as I can be. Sure there are things I want and things I need. But if I can’t get them? May as well help someone else get to where they are wanting to go.

Thinking about time, and how time relates to time, times and matter…drains me.
Ya’ll go have a great weekend and get drunk and/or get laid or something.

Have a great weekend, Dear Reader, and… Have a Song 😉