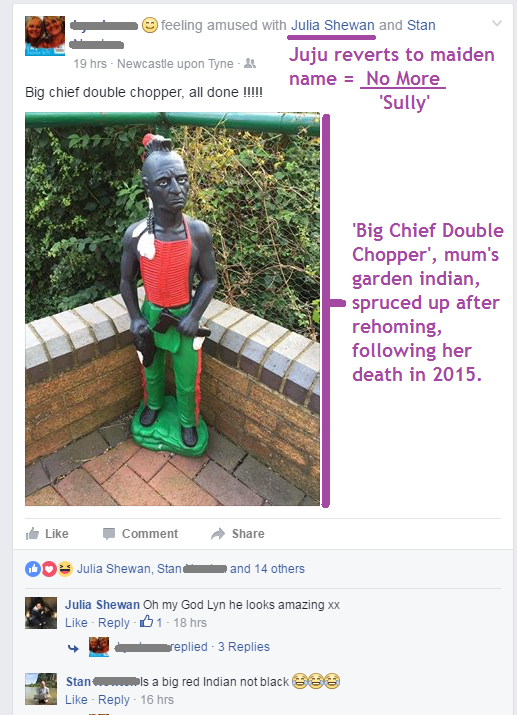 I peered at his computer screen. Big Chief Double Chopper had been mum’s garden Indian that lived in her front room. After she died, her husband Stan took the opportunity to have him re-homed. I don’t blame him; what man wants to face a double chopper on the way to the kitchen first thing in the morning.

“A bit garish,” Thoughtful Man opined. “Stan’s got a point, though, are red Indians supposed to be black?”

I smiled, recalling a couple of comments Red Frank has posted for me on ‘Scatty Sunday’. “Fuck knows,” I replied, giving him my considered opinion.

“Hmm,” I said to myself, sitting down and lighting a rollie.

Thoughtful Man swiveled round in his chair. “What?” he said launching a squint in my direction. We’re far too close, I couldn’t dodge it.

“No, it’s just I was reading about the Lost River yesterday. It was weird how I got there. Actually, I was thinking of writing a post about it…” I trailed off.

“Lost River? What do you mean how you got there?” he probed gently. That was unexpected, he normally doesn’t like to talk to me about my posts but then again he’s a bit of an American history buff – he’d probably heard of it on one of his TV programmes.

*Is that Chief or Chef’s office..? /shakes head… Nevermind…*

“Okay then,” I hesitated and marshaled my thoughts. “The journey begins in a pub.”

Thoughtful Man continued looking at me without speaking, so I showed him the tweet that had started it. The source. “Lions and tigers and beers…” I trailed off again. I do a lot of that.

“It was the description of the smoking area,” I continued. Clicky escorted him to the page.

Cleckheaton doesn’t have an Ossett pub, but the Rose & Crown is a newbie with a similar atmosphere.  It was more boisterous than my photos imply; lots of £2.60 pints were being carried out to a characterful smoking area.  Worryingly the £2.60 pint of choice seemed to be Ellands 6.5% Porter. Their homebrew pale was enough for me (NBSS 3.5).

*Yes, Clicky, any mentions of Roobee and his attention does start to wane… and he’s not a beer drinker, though he is fond of a Lion bar… Anyway,  I told him the last line of the article and said to remember it…*

“Is there any chance you might skip to the end?” Thoughtful Man asked politely.

“No. So I looked up the year 1872, of Deep Ruby, and there was this Indian battle of Lost River in the November,” I replied.

‘The Battle of Lost River in November 1872 was the first battle in the Mo Doc War in the northwestern United States. The skirmish, which was fought near the Lost River along the California-Oregon border, was the result of an attempt by the U.S. 1st Cavalry Regiment of the United States Army to force a band of the Modoctribe to relocate back to the Klamath Reservation, which they had left in objection of its conditions.

In the subsequent war, Captain Jack of the Modoc and 53 warriors held off more than 1000 U.S. soldiers for 7 months in the area of the present-day Lava Beds National Monument. Part of this was named Captain Jack’s Stronghold in his honor.’

Thoughtful Man sighed heavily and started to swivel round. “Is that it?”

*A little bit, Clicky… /holds out thumb and index finger…*

“Not quite,” I answered. “You forgot the last line.”

*What? Erm… /wipes lips and frowns… Dunno, Clicky, possibly this guy..? Shall we have a Song?*