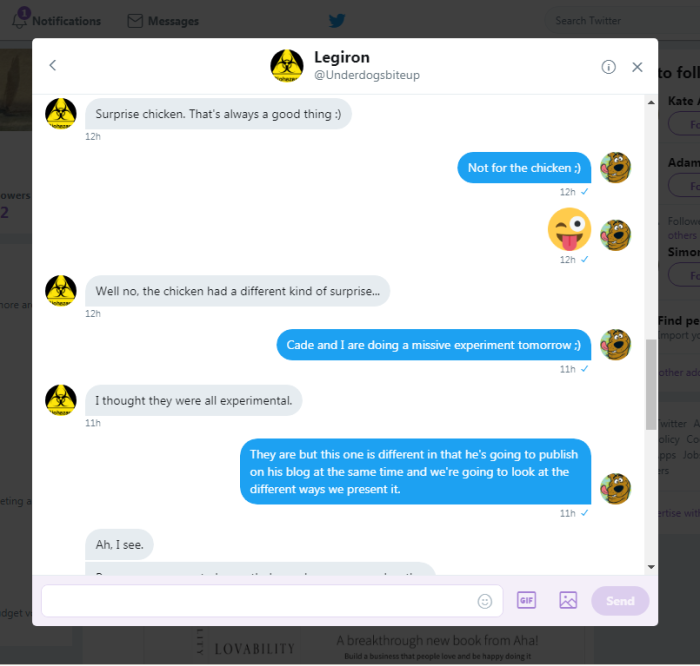 It’s prolly more a case of I liking myself less.

That said, we live and learn, I guess.

Anyway…so um…it’s Friday. It’s 13:20. I was gonna go get me something to eat, but my stomach just shrunk to the size of a walnut or smaller, so I’ll get to the important stuff.

I had an idea. I had a thought. Started writing. Got sidetracked.

Maybe it’ll come back. Let’s keep writing, and see if it does.

Just wrote two more sections, and as I was editing/formatting the above, I remembered.

We are supposedly supposed to learn from others. Some employ the kick, some employ the pet. Some may even employ both, depending on present circumstance. Where is my heart? Like…right now…where is my heart? It was in all kinds of places just a few minutes ago. But something happened to change that. So, again I ask myself…

That’s the best I got. Don’t run to, don’t run away. Curl up, and take it. It’ll be over at some point. When the storm passes, pick myself up, and move on. No need to calculate…no need to tally…no need for facts nor figures…no need for revenge nor justice nor anything else…just, move on. I’ll know when I know, or I won’t. Either way, I’ll know.

Just thought I should prolly point that out to anyone who might decide to look up the “Fight or Flight” concept. There has been an addition of sorts to “fight or flight response” types of research, and that is the addition of “fawn” to describe those who hunker down and take the beating instead of trying to fight or flee.

^Simian Mobile Disco – A Species Out Of Control^

Let’s see what’s happening in the world of invention…

Not that I have a home, nor that I will be getting one of these new “glow shitters” when and if I do someday get a home of my own. But I can sleep well tonight in the knowledge that these things now exist in the event I do get a home someday. PLUS…I can rest well knowing, that someone…somewhere…out there…is shitting on a glowy toilet with a built in laser light show, that also kills the fuck out of bacteria.

Not to mention that, as the article points out, “the dark” of your own home, and you wandering through it “can be genuinely dangerous”. I guess light switches have grown far too complex or difficult to operate. Then there’s the communal nature of light switches: no telling who has been touching that light switch; they may not be as thorough and thoughtful as you are about washing their hands after touching your filthy bits all over while peeing and pooping. So why touch a filthy disease infested light switch if you don’t need to? People are diseased and filthy.

K…so, I remembered where I was going with this bullshit. So the question now becomes…do I:

A) keep writing here, or

B) turn this into a missive and send it to Roob?

^Ross From Friends – Talk To Me You’ll Understand^

Lemme start this line of bullshit by giving a shade of insight as to how I see/interpret a lot of this crap transpiring “in the world”.

Woah woah WOAH dude!!! You just listed “complex”, and are implying that the complex/complexity made everything simple?

You cannot dispute the above. It is fact. Designed in totality, and occupied by, males. Males and only males. There are no women/females on The Internet, and this is well known. If you don’t already know this, you are a fucking idiot and a moron, and should get the fuck off The Internet immediately, if not sooner.

Now that we are aware of “The Internet” being populated by just and only men/males, we can now further qualify and quantify what type(s) of men/males are occupying “The Web”.

Why would someone need to be equipped to take a beating? Don’t we need to determine motivation(s)? Establish right and wrong? Guilt and justice?

Q1: Do you know why someone is beating the fuck out of you?

Q2: Do you know why someone wants to beat the fuck out of you?

If you choose to do so, there’s lots to think about there. And I’m not sure about you, but I’ve seen and experienced some crazy shit in my life. I’ve seen people get the fuck kicked out of them just because they were there. No rhyme, no reason…they were there, and that was the only mistake they made.

Now, you’ve prolly already jumped to both the “before” and “after” parts. But does that matter in the moment? Someone is standing on the street, and some other someone wanders by, and proceeds to kick the fuck out of the other, because they can.

^Jad & The Ladyboy – Step In My Direction | Exploited^

Now that you are questioning these events…may I point something out to you?

Q: Who is involved in this and these goings on?

Why are you involved all of a sudden, and who is it that you’ve got a mind to start beating up on? Not such an easy question to answer…is it? Because now, you are equally culpable. I hope you make the right decision(s).

I mean, prolly a reason or two for eating and shitting in the first place…right? Now…when you start to consider how much life is on this planet…Woah, that’s a lot of building. Prolly took some time. Prolly took a fuckton of time. Are we on the same page? Or have you already decided that, not only are we on the same page, but we are reading from the same book? I wonder what book it could possibly be?

Lets see if we can pick up some messages that might be coming via alternate pathways.

Isn’t Mercury, the element, kinda…prevalent in our modern world? Like…prevalent in ways that we may not like. Welp, you like your gold…right? If so, that means you like Mercury too. It also means you like Cyanide. The more you like Gold, the more you like Mercury and Cyanide. Not to mention your romance with explosives. Oh, and mining. Not to mention shipping and transportation services. And not forgetting the jewelry industry/industries.

Or is it becoming more clear just how connected and interconnected everything is?

Does everyone get their say? Andy Warhol sure seemed to have an opinion on the matter.

Did you know that The Campbell’s Soup company now owns a Texas-born staple?

What is significant about this fact, is that The Campbell’s Soup Company is based in New Jersey. Pace Picante sauce is as readily found in Texas pantries, as Mayonnaise is found in Holland, Denmark and England. And thanks to the movie Pulp Fiction, we all know what those idiots do with mayonnaise.

What are the top ten countries for mayonnaise consumption per capita?

BLOOPS!!! Holland, Denmark, and England are nowhere to be found on that list. Must be a statistical error. Or urban legend. Whatever the case, it’s sure to be human error.

*/hollers… OH! AND DON’T FORGET TO BRING THE LINK TO CADE’S POST BACK YOU… /sigh… Must of needed to go or sumfing…*

Dear Reader, the second half of this missive experiment will be along in a little while. Have a Song whilst you’re waiting…